Foundations of Evaluating Public Transit Networks, Part 4: There and Back Again

A theme of the Foundations of Evaluating Public Transit Networks series has been iteratively producing better measurements by understanding the limitations of the current ones. Previously in the series, I concluded by stating that Point Utility, or any measurement that is focused at a single point, only partially describes how useful a transit network is. In this post, I will refine the measurement of Point Utility further by focusing on a single key problem. In its current form, Point Utility measures how often riders can reach destinations from a single origin point. Rarely, however, do riders want to go on a trip and never return. Therefore, even if a transit agency is only looking to measure how useful transit is at a given location, Point Utility will not do the job in its present form.

Fortunately, the Score Generator has a solution to this problem. Rather than answering the question of what destinations a rider can reach from a single starting point, it can treat the given point as a destination rather than an origin. From a technical perspective, the virtual rider starts their trip at the end time, calculates the time and distance of walking trips with each reachable point as the origin rather than the destination, looks at where buses have been rather than where they are going, and moves backward through time. Thus, the question becomes "from which locations can a rider start to reach the destination point within a time duration?".

The need to answer this question is most evident when a Qualified Point Utility map is desired. The example maps below compare the original Qualified Point Utility map (interactive version) from the Foundations of Evaluating Public Transit Networks, Part 1 post with a map at the same time and with the same duration, but showing origin points that can reach the Public Transit Analytics office (interactive version). 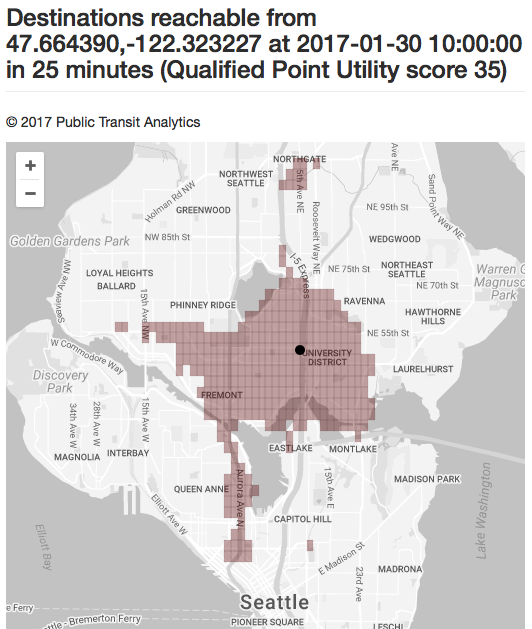 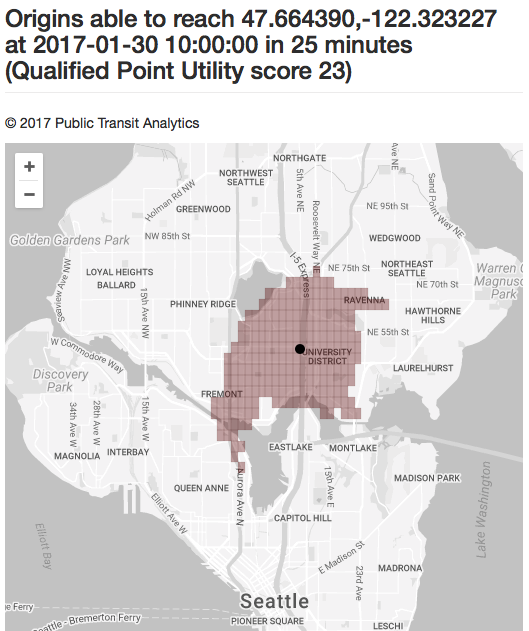 At a single time of day, transit service can be very asymmetric. Certain buses designed to get commuters into work may run only in a single direction at specific times of day. There is also the matter of timing. When looking at a single time, the distance one can go and the transfers one can make depend critically on the precise times at which buses are scheduled to be at stops.

It is logical to assume that when considering a Point Utility map, the all-day nature of the map will make the directional variation disappear. This is not entirely true, however. Somewhat different Point Utility scores are observed in the maps below: the Point Utility map from Foundations of Evaluating Public Transit Networks, Part 3* (interactive version) and a map showing the all-day reachability frequency of the Public Transit Analytics office from many destinations (interactive version). 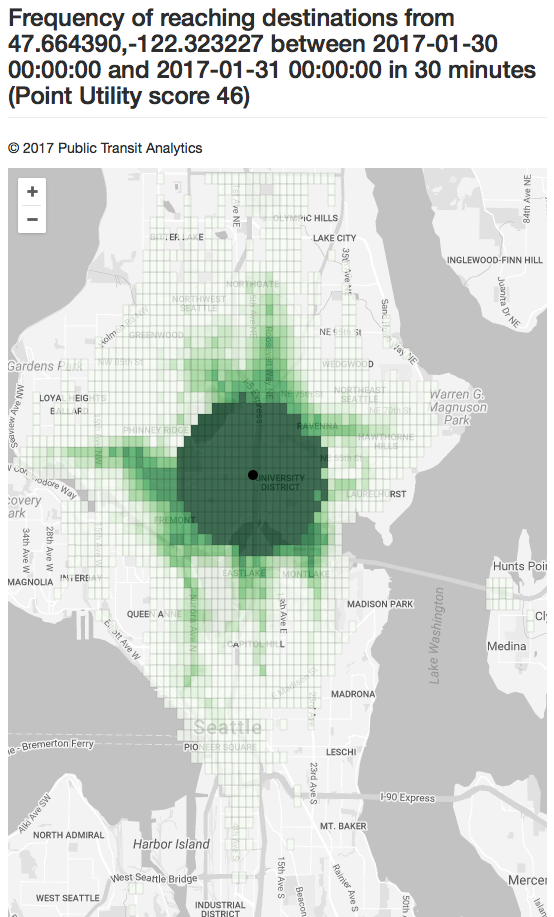 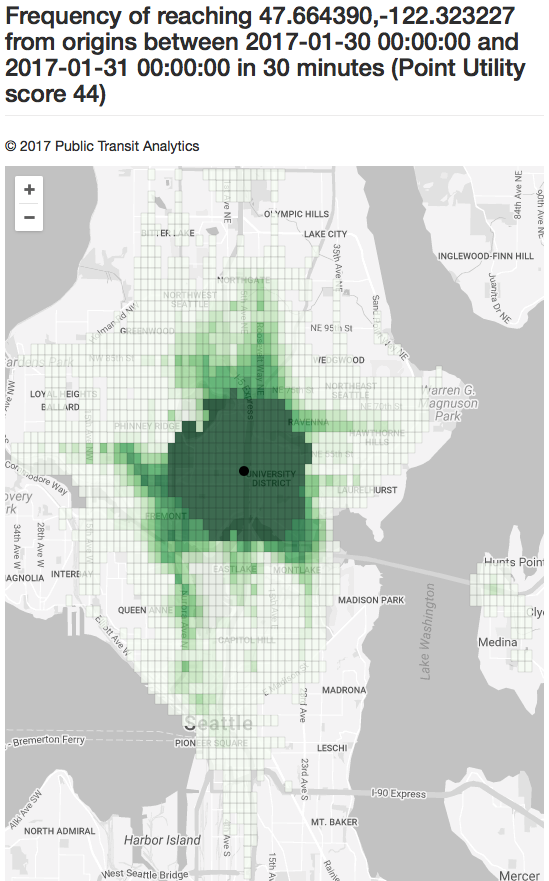 Though the results are considerably less asymmetric, the two-point difference in Point Utility observed in the example is non-trivial. Several factors can explain this. One is as simple as geography: when walking, it is faster to walk downhill than uphill, so direction matters for locations in hills or valleys. The nature of transit routes can also introduce variations. Some buses, even ones that run in both directions all day, have directional variations in their routings, particularly near the ends of routes. Buses may make stops in a loop as they turn around. This can make for an easy transfer to another route in one direction, but a more difficult one in the other. While these differences do not seem as though they would have considerable impact, the differing Point Utility scores strongly indicate that transit agencies must consider both directions when doing analyses. 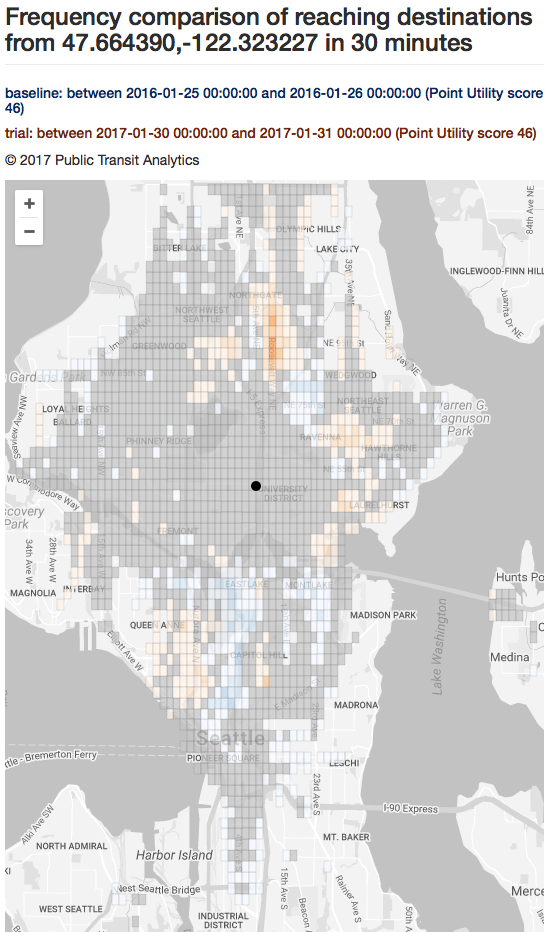 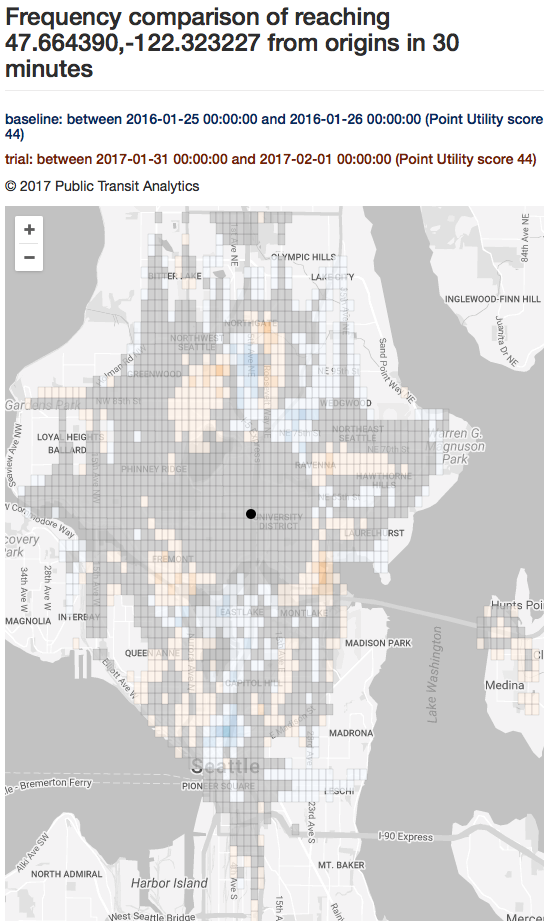 The considerable difference seen in all the maps should underscore that relying solely on measurements that look at reachable destinations from a single point does not capture the full story of how useful the network is. Unfortunately, many of the transit planning tools that I have run across share this limitation. Considering the origin points from which a destination can be reached sheds light on a little bit more of the rider experience. In the coming weeks, I will explore Score Generator features that add to this illumination.

Is your transit agency limited to one-way analyses? Contact matt@publictransitanalytics.com to understand the full rider experience.

*These maps are actually regenerations of the original maps due to a Score Generator error that incorrectly placed some destinations beyond the bounds of the map in Sectors on the map. In the original maps, these manifest as reachable Sectors near Hunts Point that are in the water.
Posted by Matt Laquidara at 1:31 PM