In the previous post in the Foundations of Evaluating Public Transit Networks series, I ended with a brief discussion of why Qualified Point Utility on its own does not represent how useful a transit network is to its riders. One reason comes from the "Qualified" nature of the measurement. A Qualified Point Utility score does measure something, but only at a precise moment in time.

Looking at a transit network at a specific time of day does not provide an accurate view of the overall utility of the network. In some ways, this is an intuitive conclusion. People can use public transit networks at any time of day. Suppose, however, an agency chooses to limit its analysis to some majority of riders that uses transportation in a predictable, scheduled fashion. An agency dominated by day-shift commuters may limit its analysis to typical commute times. In this case, the range of starting times might be small enough for the agency to feel comfortable selecting a single starting time. The implied contention is that this single time is largely representative of the whole time range. This is observed in practice outside of Qualified Point Utility computations: King County Metro's comparative isochrone maps, examined in the previous post, have a starting time of 8:15.

). This yielded a score of 79 and is visualized below, with an interactive version available as well. 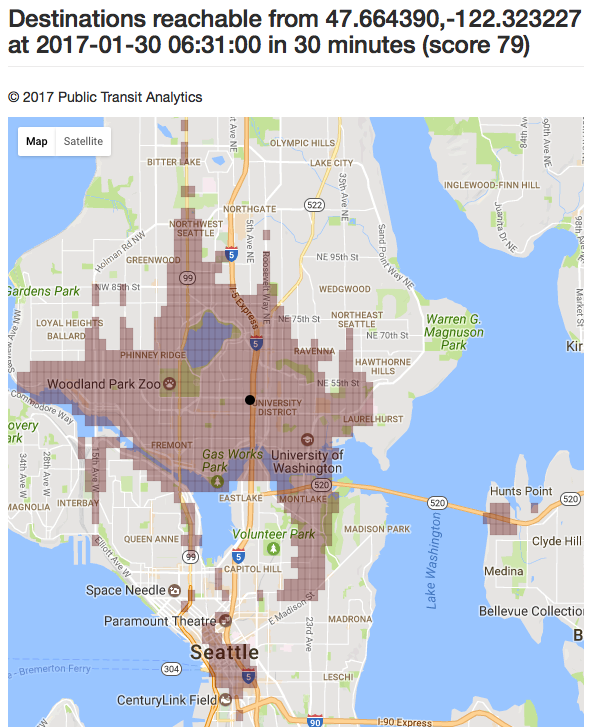 To determine how representative this score was for an individual who generally rides transit in the early morning, I then had the Score Generator run the same request, but for each of the subsequent five minutes after 6:31. The results are striking, particularly when visualized, as seen below and in the interactive version. 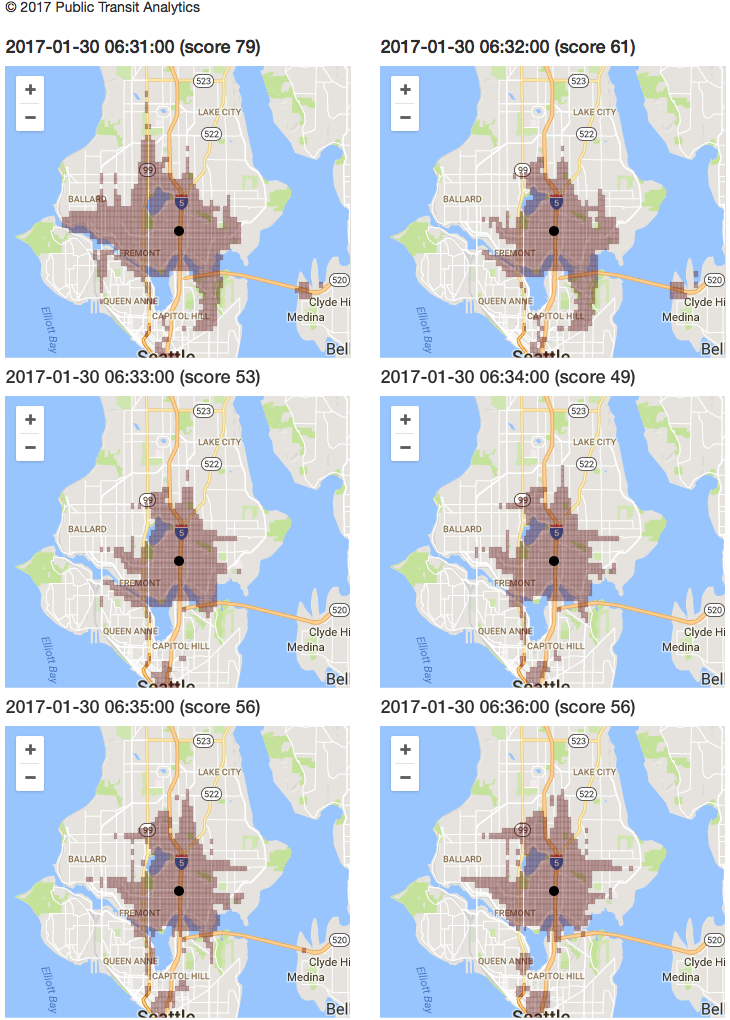 The range of scores, from a low of 49 at 6:34 to a high of 79 at 6:31, represents considerable variation in how useful the transit network is. As the map is a 100 by 100 sector grid, a score that is 30 points higher than another represents approximately 300 more sectors of the map that can be reached within the 30 minute time constraint. Furthermore, even when two consecutive times have the same score, as with 6:34 and 6:35, the area of the map that is reachable is considerably different.

The results of this experiment cast doubt on any method of evaluating a transit network that is limited to a single time, even if the transit agency believes that time to represent the common experience. Transit networks are complex and volatile; the interleaving of the schedules of many transit lines yields peaks and valleys in the number of destinations that can be reached on a minute-by-minute basis. While this assertion might appear to be a condemnation of Qualified Point Utility, it instead reveals the path going from Qualified Point Utility to a better measurement. In next week's post, I will detail how the Score Generator can do additional work to remove the time qualifier from Qualified Point Utility.

Is your transit agency evaluated in a way that fully accounts for its complexity and volatility? Contact matt@publictransitanalytics.com to arrange a consultation.
Posted by Matt Laquidara at 7:11 PM