Then and Now: Comparative Maps

This week, I am taking a break from the Foundations of Evaluating Public Transit Networks series to explore a variation of Point Utility maps that should be of great assistance to both transit agencies and their customers. In last week's post, I proposed a hypothetical conversation between a transit planner and a rider. In that scenario, the transit planner can show a concerned rider the quality of transit service in their area by showing them a Point Utility map. Riders, however, are most often likely to become concerned when their network is undergoing change. Thus, a tool that can measure and illustrate change is a powerful one in a transit agency's arsenal.

Point Utility scores are designed to be comparative. It is possible for a transit planner to respond to a rider's concerns about a restructure or service cut by showing them Point Utility scores, centered at the rider's home or office, from before and after some network change. This, however, would likely fail to result in constructive dialog. A set of scores that demonstrates a massive improvement in the rider's transit situation may be sufficient on its own, but may still be too abstract to be compelling. In situations where the Point Utility score stays the same or declines, the score provides no diagnostic information to understand this decline. When compressing this much data into a score, some of the nuance is lost.

Of course, it is possible to present two Point Utility maps side by side, providing a depiction of the transit network before and after the change. This, however, becomes difficult to process visually. Keeping track of a single Sector when switching between maps can be challenging and colors can appear to be different based on the colors around them when they are in fact the same. For that reason, the Public Transit Analytics Score Generator can overlay one map on the other, yielding maps like the one below and its interactive version. 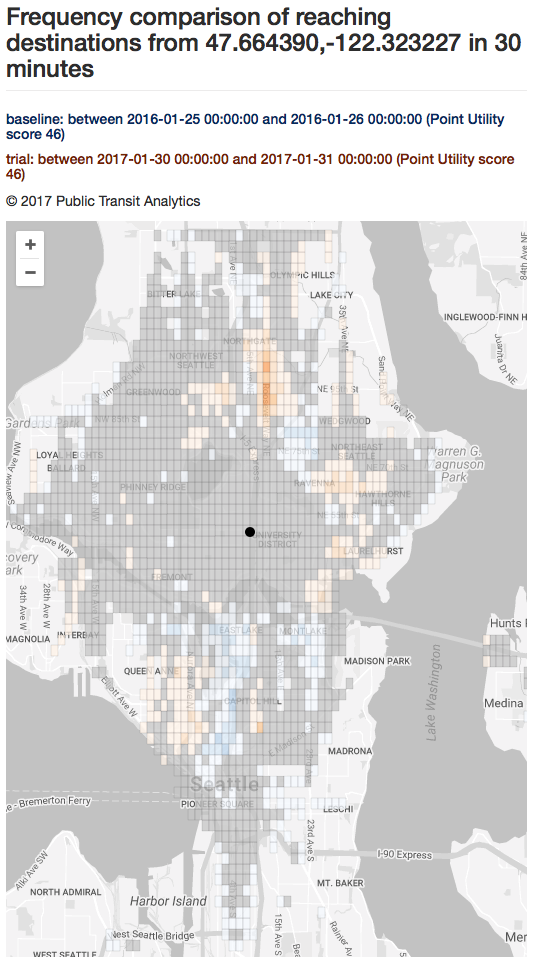 Specifically, this maps looks at the difference in 30 minute Point Utility at the Public Transit Analytics office using the previous example of January 30, 2017 as a trial, compared to a baseline of a Monday around the same time in 2016. In a Point Utility map, the frequency at which a Sector can be reached are divided into nine intervals, or bins. The comparative Point Utility map shows the difference between the two bin values at each Sector. Sectors more strongly orange can be accessed a greater number of times within the trial time span. Sectors more strongly colored blue can be accessed less frequently. Grey Sectors are ones where the bin value does not change. To get precise information on how much of a change occurred, hover the cursor over a Sector. Clicking on a Sector reveals the most common, or mode, path that serves as the fastest way to reach the sector for each of the baseline and trial times.

Just these pieces of information can be useful in diagnosing potential issues with a restructure, before or after it is implemented. In this example, it is somewhat surprising that there is not a significant change in Point Utility between 2016 and 2017. In that time, Puget Sound's Link Light Rail line had been extended, representing a large influx of frequent service in Seattle's Capitol Hill neighborhood and the eastern edge of the University of Washington. This freed up bus capacity to increase route frequency in north Seattle and prompted a substantial restructure of the bus lines serving the area to take advantage of the Link's fast connections. For the eastern edge of Wallingford, where Public Transit Analytics is located, the map shows that the results have been mixed.

Looking at the most common paths offers a first stab at explaining the degradation indicated by blue regions. An area of blue between Ravenna and Maple Leaf provides an interesting example (outlined in black below), as many new hours of service were invested in this area. Despite making considerable frequency improvements to the 372 bus, which runs on 25th Street in this vicinity, that bus does not provide a very direct transfer opportunity with the frequent east-west service near the Public Transit Analytics office, the 44 bus. Notably, this path is not the mode path for the trial; instead a path featuring a bus that only runs at commute times (not pictured below) is the most common one. In the past, the area was served largely by the all-day, though infrequent, 72 bus, which offered transfer opportunities more suited for east Wallingford. With its ability to highlight problematic areas, and hint at their causes, the map can indicate when reconsideration of certain parts of the restructure may be warranted.

While comparative Point Utility maps are still limited to showing how useful a transit system is at a single point, they represent perhaps the strongest tool available for having a constructive dialog when making changes to a transit network. As long as an agency's schedules reflect reality, Point Utility maps capture what a rider can actually do more accurately than the maps generated by any other tool that I have seen made available to transit planners. The increase in accuracy comes along with a comparative viewing mechanism unparalleled in other tools.