Thus, it is critical to determine how representative a single Point Utility measurement is of the overall network. To get a rough, intuitive sense of this, the Score Generator calculated the 30-minute Outbound Point Utility of the center of the Sector that contains the Public Transit Analytics office on January 25, 2016. Then, it calculated the same Point Utility but for the center of all of the adjacent Sectors. The results are depicted below, with an interactive version available as well. (The interactive version may take some time to fully load). 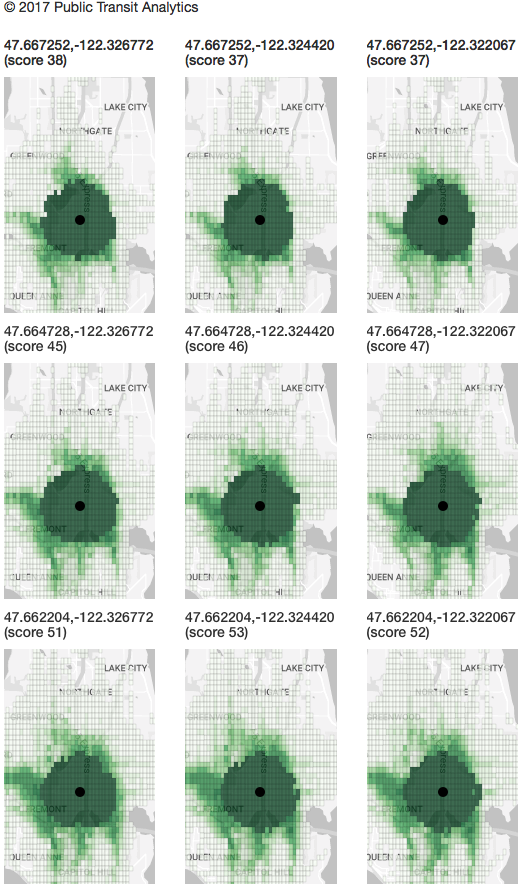 Not surprisingly, a variety of Point Utility scores were obtained by shifting the starting location. In this example, the most extreme shift of distance is approximately 650 meters (2,000 feet or one-third of a mile) and resulted in a score change of 14. A difference of one in a point utility score is usually non-trivial (in this 10,000-Sector map, every increment of Point Utility means that 14,400 more pairs of times and Sectors have become reachable). As such, it would be difficult to claim that the Point Utility Score at the center reflects the utility of the network on the whole; it may not even account for how useful the network is in the adjacent sectors.

Whereas Qualified Point Utility could be converted to Point Utility by merely considering the former at every minute of the day, it is more complicated to analogously consider the Point Utility at every Sector. In this map, there is an order of magnitude difference between the number of Sectors and the number of times of day. If a transit agency requires capturing a larger service area or using finer Sector granularity, the difference in order of magnitude could easily grow further. This could increase the time taken to generate a map, as well as its monetary cost, to unacceptable levels. In subsequent posts I will explore some techniques that may cut down this time and cost, and eventually surmount the problem of objectively measuring how useful a transit network is.
Posted by Matt Laquidara at 8:29 PM